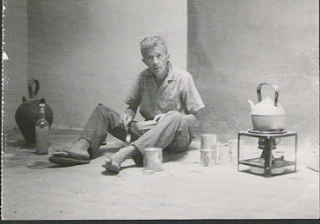 By this time Mr. Bowles had lived so long in this strange and succulent
culture that he had almost forgotten his native tongue. He knew this,
and it pleased him. The way he saw it, if it didn't stick around, he wasn't
supposed to have it.

"If your tongue abandons you," he used to say, "learn to speak tongueless.
No mouth? Learn to dance."

His buddies liked this idea in theory, but were too attached to the tangoes
and sambas they created with said tongues.