Be it a result of the political air about us these months, or merely the constant and natural reaction of the streets crossing just outside the door; I notive the clear tones of words like 'action' and 'connection.' Those sounds made with the inflection of the righteous and the pride of the chosen matryr. Their employ is never strained and never complex. Grassroots, they seem to imply, are simple structures one does not dissect, but accept, nurture, wrap inside ideas of community, home, hearth.

Middle-aged women, having finally allowed their bodies to evolve beyond roles of mother and wife, are now soldiers of puporse, the bloodless battle for the future of their souls, their district lines as they intersect with notions of dignity.

They age further and become the ancient women I watched today at lunch. I saw them first through the window before I even entered. Two tables long and dotted with their male counterparts, their faces and hair already on the slow march toward a unified whole. They were almost indistinguishable from one another in stature and gaze. 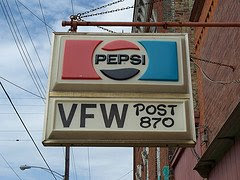 Each looked around her as others spoke, as if confused by the sound, as if they should understand but could not. Like so many names, birthdays, faces, and broken smiles, they had lost the facility to connect with the living, gained the uneasy gait of the dying. And, somewhere in the eyes, a hint of sadness. The only thing more unbearable than the clueless fall into suffering or death is is to glimpse that spark of recognition in the victim, the whispered sign that reaches out to us, begging without shame, for saving.

It was the men who were sentient. Fitted with pointed caps pinned with mementos and shining proof of valor. Chronic bills and countless pain garnered in the name of freedom. A lone, plastic American flag is taped to the back of a wheelchair. The flag is made in China, but not Japan. For the group sharing their strange memories, that is the important thing.

A memorial gathering a Taco Bell. Veterans of a foreign war. Men and women who put aside the immensity of their lives to serve a cause bigger than the universe itself, a foe straight from the radio serials of their childhood. Sitting together over chalupas in a place they themselves fought for.
Posted by Michael K. Gause at 8:35 AM No comments: Links to this post