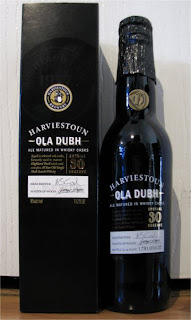 I had the rare pleasure last night of drinking old oil from a metal keg.

And it was sublime.

No, my penchant for the drink hasn't led me to panhandling Jiffy Lubes. Not yet. "Old oil" is the translation of Ola Dubh, Harviestoun's Brewery's unique collaboration with Highland Park, Distiller of the Year. I commend Bulldog in Nordeast for having the moxie to purchase two firkins of the stuff and serving it gravity as part of their regular Wednesday tradition, "Firkin Night." On Wednesday's the bar taps a firkin of a random beer - could be Summit, could be a rare, oak-aged elixir - and serves it without the use of standard Carbon Dioxide. The beer flows from the firkin like Gatorade from a Gott cooler. This old-school process elicits more flavor from any brew, considering it has it to begin with. Many macros taste so god-awful, they are served ice-cold, guaranteed to numb the tongue and hide the evil. Use marketing to tell your customers that this is "the AMERICAN way to enjoy beer!" and you've vindicated the way you hide your imperfections. But I digress...

Ola Dubh 30 starts with the brewery's award-winning brew, Old Engine Oil and ages it in casks used to store Highland Park's 30-year single malt scotch. This is the first ale to be aged in malt whisky casks from a named distillery and, with tracable casks and numbered bottles, the first with genuine provenance. Bottles are available in limited supply in the state for around $30. When I heard that Bulldog was offering 10-oz. glasses for only $6 AND served gravity? It's no lie I almost lept out the window to get to the car.

To the eye Ola Dubh is infinite black with reddish-brown hints at the edge. You see at once that it is too thin to be a stout, though the head was as dense as the best Guinness. The nose is that of a restrained baltic porter, a dank but clean cellar floor whose surface has enjoyed a spill or two of good whisky. Upon the first sip the word is creamy. At 8% A.B.V. this simply couldn't be smoother. I actually had trouble distinguishing when the thick, quarter-inch head ended and the brew proper began. The second word is balanced. After the cream one senses the impending attack of high-grade alcohol, but it never comes. The heat pirouettes and disappears behind a cashmere curtain of half-bitter chocolate. Truffle oil steps forward and punches the air only to be hauled off by security guards of currant, raisin, and clove. These flavors mug for the camera, each enjoying fleeting moments of fame. The result is an undulating spectrum of autumn for the beer-loving palate. The viscous finish brings you back to the name, and you're lucky. The oil bonds the deep flavors to your tongue to make this the best tasting–and longest lasting–beer you'll have in a very long while.

Future incarnations of Ola Dubh, I understand, are to include aging in Highland Park's casks of 40 and even 50 year single malts. Let's hope the Bulldog can commandeer a couple of those as well. If so, I'll be there, sipping age and strength in rare combination.