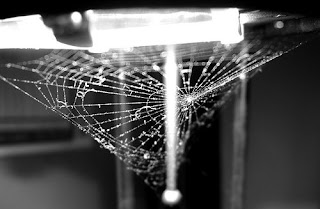 It is a strange thing to say, but sometimes you find yourself uttering notions of such an odd generality that you are embarrased by them. In speaking of fear and evil, and I will say that strange thing now, that which I have feared most - and thus have found most evil - is the sense of overwhelm in the All. You no doubt see immediately my quandary. It is a queer thing to hear, yet does not seem esoteric as much as simply odd. To single out Everything as an object of repulsion. The individual components are benign enough, but they, coupled with their rippling implications to me and to each other, create a seemingly annhililating blast which all to often renders me frozen and sinking. I attempt to find the balance of these things find that missing call note that we all overloook. Trying to listen to a constant explosion to pick out a C sharp. This great stranger I have named everything from Odin to Progress and my engagement can best be likened to the way a toddler approaches a large dog - a terrible fascination that must be entered.

It comprises a zillion faces, each a simple sound from an even greater cacophony of contexts. It varies and has taken on every imaginable form I can conjure - from the words I perpetually lose my way in to the smoke from my mouth to the electron cloud of possibility each second that comes contains. I reach out to each one through the growl it emanates beneath the radar. To be clear I do not find it all evil in a sentient sense, but in that unique way our species considers evil that which does not care a lick about our survival. Chaotic Neutral. I cannot help but reach out to it, pull myself through it. What else can we do? It is not heroicism, merely the inability to conceive an alternative.

From my chair outside a local bar in Nowhere, MN, I am embraced ineffectually by a network of phone lines. Their angled vectors are the basis for large paintings in the Walker no one understands, but cursorily appreciates. They have birds that dart between them to assure us we are not ensnared. They are exactly what we need and to the proper degree. The lines intersect, convey, agree, and depart as the connection between things in the most simple of metaphors -- the questions from the woman at the next table to the bored 12-year old who would really rather be playing with himself in the bathroom, to the Journey songs on the jukebox, to the reason I have stayed in this chair as long as I have. For a split second I realize that this makes me part of the web itself, part of what I fear, and thus, if I remain loyal to my own sense of connection, part of the larger whorl I have termed evil. Thankfully, the thought lasts only a flash, already on its way, to trailer parks and bourgeois mansions alike, atop strands that connect and back again.
* Photo by Auntie P on Flikr.
Posted by Michael K. Gause at 1:31 PM