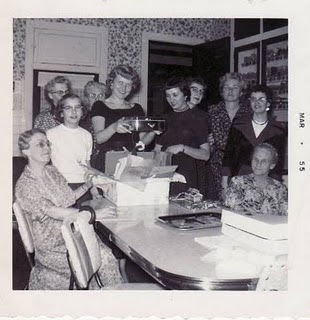 The woman at the table was about two-thirds.

With that I mean to indicate her place in the social order of table #8 in the restaurant. Directly before her sat all that stood in her way between her and prime matriarch status. One could easily discern her place through the hairstyles which were clear descendants of one another, as well as the very specific look she used against her elder when she spoke.
We're no stranger to it.
A mix of pained devotion and weedlike envy. It speaks of many things the tree of life lets you grow untended without question. Two-Thirds, in reply, idles at her awkward pole position. First attendant at the suspended casket not yet upon them. She rations respect and rebellion in measures dictated by convention. Mouth full, she offers value-added statements to meant complement the mother tongue. She is afforded a number of practiced motions that imply her place in line.
The cut-off:
by reason of youthful insanity in the presence of the crone
The addition:
empirical proof that education is not always laid to waste against the rigors of real life.

The dismissal:
risking disrespect, this tactic leverages familial closeness and the playful dynamic that speaks to the former this late in the game

Seated some feet away behind the elder, I have a clear view of Two-Thirds. Her face reveals everything by necessity. It smiles and winces with grey adjectives rooted deep in the lines that make her face 'complex' in the light of my simplistic Gestalt understanding. Some forms are blessed with large eyes and a supporting cast of minimal features. Together they offer the viewer an easily digestible set of shapes to engender closeness. Think babies. Think Bugs Bunny. Think any one of a million Anime hotties. Eyes, lips, nose. These intentially basic features are often used in film to depict beauty and, thereby, goodness. There is nothing complext about the visage of Snow White or Sleeping Beauty, Bambi for that matter. Complexity, on the other hand, is the domain of darkness, as if only the simple shall win or be saved. However, Two-Thirds is beset with a number of unfortunate equations. The distance between eyes and nose, divided by the circumfrance of the cheek, multiplied by a lip-chin metric that makes me uneasy about life. Her head metronomes at even left and right angles of 45 degrees of understanding, with all horizontals of her face seemingly elongated. Think artificial horizon. Think overcompensation. Think early figure sketches to illustrate perspective. They are all here fully manifest and sharp enough to slice through the years left before she takes her place on the other side of the table, watching her own daughter's face lose its virginity to the passage of the torch.
Posted by Michael K. Gause at 5:46 AM