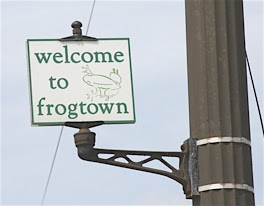 Her hips navigated the crowded formica deftly, banking high at the turn and counter-balanced by three or more bowls of the vicious-looking stew they served. Rare brisket floating face down in the deep end of something eternally referred to as "the special." The rest he could handle, double-barreled egg rolls steaming atop rice noodles, green onions and cilantro.

His eyes held her a little longer than usual in his sleepy gaze, giving anyone watching a hint as to his next pleasant dream. A regular who ate everything on the menu with a fork, he'd awkwardly strike up conversation with Gina whenever possible. She'd learned his preference for S151 over S150 and why. She'd heard bits of his life story between the holy basil and the fortune cookie. The fact was she felt she had probably gleaned more about him in the last six months than his own mother knew about her boy now. She feels him watching her even when she is preparing the Cafe Sua Da behind the counter, her ego waffling between flattered and disturbed.

He'd spend countless meals downing Asian Fusion and working out why her lower back hides behind what will eventually turn out to be a Rohrschak dragon. At $7.25 a pop he gleans everything he can about her. He'll use up all the rules he ever learned in bars from Frogtown to Uptown, from the failed parties that never stood a chance; and not once will he see that here a whole different set were in play. It's like war. Each side throwing down not the best card, but the next one, either to be taken prisoner or to prove that the value of what you have is wrapped up somewhere between chance and timing.

With her it wasn't so linear. With Gina it was a complex network of connections, visible and opaque, which branch out and double over like the family tree hand-drawn in her uncle's room. Rules of clan and color-schemed bloodlines. Infinite walls to keep the in in and deviations of body logic outside, out in the world better left to its own.
Posted by Michael K. Gause at 9:51 AM