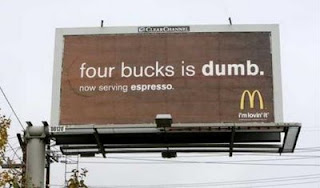 "I got things goin' on, see?"
Here any loud remark would have broken the fragile bond between me and my reading matter. Some days you can blaze through scores of pages, literally feasting on invisible rhyme and metre, while others you're a moron incablable of tasing even the barest morsel of a line. Today I am such a moron. It is not an altogether negative state, but I am unable to sail through tunnels of words and actions and their formidible web connections. I am, however, capable of something on another level. Today I am able to look beyond the deep buzz of all those bonds forming and breaking to see the outline, the silhouette, of something larger. It is like being still in the forest and consciously toggling your attention between noises in the fore- and backgrounds. Except today there is no conscious control. Today you just take it. You take it and try.
"'Cause I got things goin' on, see?"
That's what I hear today. That's all I hear. I look up to see him standing at the counter, unable to stop shifting his weight from foot to foot and fumbling with the large rings on his chubby fingers. Now the person on the other end of his cell phone knows what we know. He has things goin' on. Bobbing left to right and back again he was a tiny, one-man amusement park. Blue neon from his cell, golden fingers moving up and down at his side to some inaudible tune, and the dizzying splat of colors that made up his running suit. It was hard too look at, harder to look away.
The short Latina behind the counter was more patient than I would have been. Which special and what drink, that's all. She'd asked it fifteen times already, and it wasn't even noon. Fact is, she didn't speak much more English than that. Thanks to her uncle who got her the job and a cheap apartment in a Spanish-speaking neighborhood, she really didn't need to. She had plans, though, to learn this strange tongue. If she ever wanted to do something else, she would have to stretch herself, contort her mind in a new way around this language built more, it seemed on slang and exception than to any rules you could hold onto. Like trying to figure out some rhythm or cadance of a busy convention center. But she would try, she would work at training her mind to be an acróbata. She was was unaware of her jealousy of the clown in front of her. Ridiculous to see and hear, he could still bob and weave his way through the language. You could almost see it in her eyes, the way she held her anger back with both arms, kissing its head, saying it's okay, it's okay.
So she would wait. She would let him flirt and stall and make sure all four people scarfing down bugers knew he was something special because of his clothes, those rings, and the countless unseen things he clearly had "goin' on."
Posted by Michael K. Gause at 11:26 AM