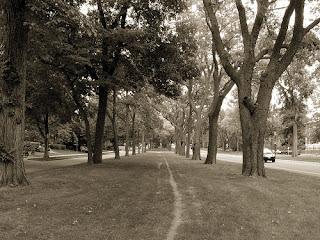 In a rare moment this weekend I have found the frequency, the frequency of the invisible to and fro of the All. I found it and I matched it for a second. At that moment I was part of it in its dance.

As a series of cars passed me from behind parked on the boulevard, I contradicted
the fact that I was sitting still. No, I was going backwards along a thread made concrete
in the moment by the dragging of my jagged fingernail across my gumline.

Its speed matched exactly (and that is the secret, I am convinced) the speed
by which I was overtaken on the street.

The taste, an underground transmission I could not interpret
but strong enough to be received clearly by anyone in the state.

I celebrated.
Posted by Michael K. Gause at 1:17 PM