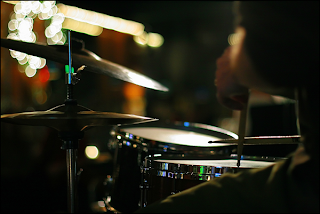 Birthday gin tastes best, especially when it's Hendrick's. None of that phlegmy twang the liquor so often desposits in the back of the throat. In its place a floral bouquet made crisp, the latter by cucumber, the latter by bathing the whole mess in the vapor of rose petals.
It is extra special tonight, too, since it brings back memories of The Dakota a couple of weeks ago. A night of jazz dressed in fashionable brick faux facade, the chic splash of wine colored cymbal drapes. Another sip and I sudddenly remember where I hid my napkin notes made while a white dragon raised nine-thirty eyebrows with his saxaphone and unexpected madnotes. It wasn't gin at the time, but a dirty brew not likely to be soon repeated. Now the napkins.
Evening star blonde walks out tight but languid diva all practiced jazz chanteuse shoulders and still flat tummy for successful boyfriend and shiny vest made for the C-sharp she starts us with. She looks over at the
Pianist
who is Joan Baez no lie but no wrinkles either and if sex, we don’t care to see it unless she's got a side we haven't seen. Hair frizzed as if it's grown beyond the need. The gray streaks respect and we do for her demure and comfort before keys not playing but played. Only once a glance and smiled up at us and over to the science professor at trap set thin almost eighties piano tie whose name I heard as
Jay Epstein
but I saw as mad scientist Clayton Forrester with match grip and nodding to years of set up take down and across state for what little is divided among five. A little easier he found it to smile in sporty old lettering thin sweater at Joan’s trickling keys and constant smile of singer turned his once in a while way. In bar glass reflection I saw it in his whimsy—a plant still growing and Take Five. Watching him and old friend kept close, the bassist
Terry Burns
childlike chicken dance elbows to a rhythm that outlasts us all. He's always a smile for a friend. A perfect laugh shares himself and said drumming prof while the corner crone ages with her since 1969 standard now without husband Friday night.
For mine and all the aging blonde stakes her claim toward something vintage. Her smile suddenly authentic stops me, a laugh at staid elder on the sax who 's name sounded like
Car
who now contents to play the chassis of this convertable on twilight back road to third base. See he shook her and us all with star point of restrained solo hijinks that reveal nothing short of a learned and subtle genius. Powered her smile for the remainder of the evening, it did and we.
Sax and drums meet eyes for a higher moment of understanding and personal history. Nothing lasts, and the latter returns to his lot, resigned to let his old colleague take the limelight, but never forgetting that fork in the road all those years back. He connects again with the bassist, who has never let him down, his populist fate which he decides, like every Friday night, isn't a bad way to end a song.
So it makes sense that Hendrick's and a cool night like this would recall that night so. Rooted in that neon sharpness to keep the weekend a thing to covet, it also imparted a little something human, something bathed in the vapor of rose petals.
The myth of jazz distilled
a smile not so much imbued
as right there for all to see
Posted by Michael K. Gause at 12:46 PM

I like this...although so much of it is completely disjointed and hard to follow... that in itself gave me the impression that I would have to read it and reread it a number of times to have even a scrap of understanding as to what was going on, as is often the case with streams of thought, sort of... but I was pleasantly surprised to find that after reading it once, I had a full idea of the room described, the people and their relationships... my mind and imagination kind of filled in the blanks, which is cool because you left enough holes for it to be ambiguous, different for each reader.